The pre-Christmas event on Saturday the 13th of December has been organised by ‘Rudd Beer Meister’ via social media. It follows the refurbishment and reopening of several of Ruddington’s drinking venues in recent months.

They’re planning to begin at The Ruddington Arms (formerly The Jolly Farmers) at 2pm and gradually work their way via The Victoria Tavern, Bar Six (formerly McArtney’s Bistro), Red Lion, Red Heart, Three Crowns, Bricklayers Arms and finishing up at The White Horse. Anyone over 18 is welcome to join in! 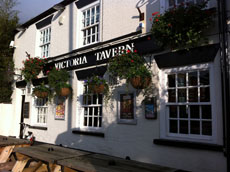 Also, over the weekend between Christmas and new year, The White Horse and The Three Crowns have announced a joint ‘Winter Beer Festival’. It’ll take place from midday until late on both Saturday the 27th and Sunday the 28th of December in a heated marquee in the White Horse Beer garden. They’re promising 30 real ales, 20 ciders, food stalls and live music – plus a discount for CAMRA members!