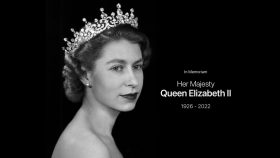 Further to the sad news of HM The Queen passing away on the afternoon of Thursday 8th September, many of the residents, businesses and organisations in Ruddington paid their respects in different ways.

Tributes flooded in online and in person to express our local grief, love and admiration for Britain’s longest ever reigning monarch, whose Platinum Jubilee was celebrated so magnificently in our village just three months before her death at the age of 96.

Among the first of these tributes, on Friday 9th September, all 370 pupils and staff at St Peter’s Junior School tied red remembrance ribbons on the school gates at Ashworth Avenue in memory of our Queen and took part in a special assembly to celebrate her life.

Then, prior to prayers and thanks for the life and legacy of her late Majesty at the usual Sunday service on 11th September, muffled bells rang out at St Peter’s Church following two days of the historic building opening as a quiet and prayerful space, to mark the passing of our Queen.

Vicar of Ruddington, Rev Andrew Buchanan, said: “There were opportunities for anyone who wished to sign or write in a book of condolences and/or to light a candle. Like all funerals, the funeral of HM Queen Elizabeth II, was a time of both mourning and celebration.” 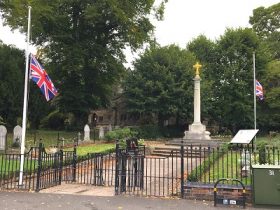 As a period of ‘national mourning’ continued until after the funeral on Monday 19th September, the flags at the War Memorial outside the church remained at half-mast, along with the Union flag outside St Peter’s Rooms.

Inside, Ruddington Parish Council also opened a Book of Condolence, which was signed by many residents and has now closed. We were also invited to lay floral tributes on the lawn in front of the building.

The night before the funeral took place (Sunday 11th September), the Government invited people to come together to “mourn and reflect on the life and legacy of Queen Elizabeth II” during a minute’s silence. The moment of commemoration was marked at 8pm, taking place at home, on doorsteps or on the street with our neighbours. 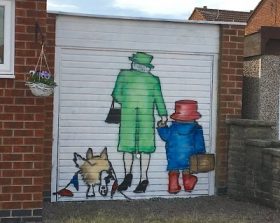 As an alternative, Ruddington Parish Council invited residents, local groups and organisations to join their Chairman at the War Memorial on Church Street to mark the National Moment of Reflection. Cllr Graham Fletcher said a few words prior to the one-minute silence there at 8pm.

On Monday 19th September, the day of The Queen’s state funeral, her coffin was carried from Westminster Hall, where she had lain in state, to Westminster Abbey on the State Gun Carriage of the Royal Navy, ready for the formal service at 11am.

The final journey of The Queen’s coffin took place on Monday afternoon to Windsor Castle, where a second service took place. The coffin was then lowered into the Royal Vault before being interred in the King George VI memorial chapel, located inside St George’s Chapel, during a private family-only service.

HM Queen Elizabeth II will be sadly missed by many in Ruddington, across the country, the Commonwealth and the world. A new era now begins, with HM King Charles III at the helm.