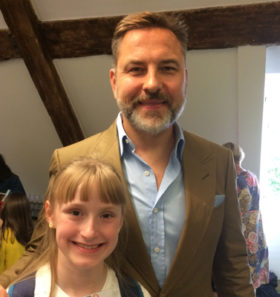 On 16 June, 11 year old local resident Eleanor Boniface was a guest at the finals of BBC Radio 2’s annual “500 Words” competition, held at the Tower of London. The competition invites children between the ages of 5 and 13 to write an original story on any subject or theme, in 500 words or less.

This year’s competition saw the highest ever number of entries, with 131,798 stories submitted, and proved third time lucky for Eleanor. Her 2017 entry, entitled “500 Words of Literary Hell”, was selected as one of the top 25 in the 10 to 13 age category, much to her astonishment and delight.

At the finals, which were broadcast live on the Chris Evans Show on BBC Radio 2, Eleanor’s story didn’t ultimately win one of the top 3 prizes. However, she and the other finalists all received a signed copy of David Walliams’ latest book.  Eleanor also spent the morning meeting the likes of Chris Evans, Niall Horan, Sir Derek Jacobi, Charlie Higson, Francesca Simon, David Walliams, David Suchet and Jenny Agutter.

Huge congratulations are extended to Eleanor from all in Ruddington for her amazing achievement!