Mark Brown of Grange Avenue, Ruddington, is competing in the British Transplant Games in Birmingham from 2nd to 5th August. The games, which have been run annually since 1978, will see over 700 athletes participating in over 25 events cheered on by over 1250 supporters. 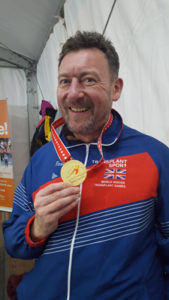 Mark (51), a kitchen designer at Howdens Joinery in Newark, suffered from the hereditary condition Alport Syndrome, which led to kidney failure at the age of 25. After 20 months on dialysis, lasting for four hours a day, three days a week, Mark had a successful kidney transplant in 1994.

Mark says: “It was scary when I got the call to say a transplant was available. My condition was stable and, though now a routine operation for the specialists involved, it was still not without risk. Thankfully it’s now 24 years since my transplant and it’s still going strong. I’ve represented Nottingham City Hospital by participating in the British Transplant Games for the past few years in Sheffield, Bolton, Newcastle & Gateshead, and Liverpool, winning medals in the 100m, bowls, darts, archery and basketball. This year, the City Hospital team will have 26 people competing (25 kidney transplants and one liver), together with 28 supporters and three live donors.

I missed the games in Lanarkshire last year due to international commitments; I’ve been fortunate to represent my country at a number of Winter World Transplant Games, winning medals in skiing, snowboarding and curling. I successfully completed a hat trick of gold medals in curling in Switzerland at the Winter World Games in January this year. 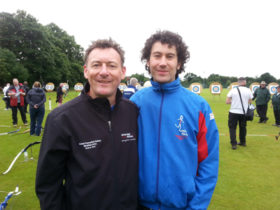 The games in Birmingham will give me an opportunity to catch up with friends and my brother James (pictured with Mark), who also had a kidney transplant 13 years ago. Although we’re in different age categories, we try to better each other – James being the more athletic of the two of us!

The competition this year will be intense as participants will be hoping to qualify for the Summer World Transplant Games to be held in Newcastle & Gateshead in 2019.”

Whilst the games are fun to compete in, and the medals nice to receive, the real aim is to showcase the benefits of transplantation. Every 10 minutes, somebody’s name gets added to the donor waiting list and three people die daily because they can’t get the organ they need. More than 6,000 people in the UK are currently waiting for a transplant, But with only 34% of the UK population actually registered as organ donors, the NHS Organ Donor Register team says more work needs to be done to raise awareness of donation and to urge those on the donor register to share their wishes with their loved ones.