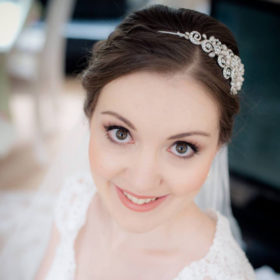 Local resident Kayleigh Brooks has reached the final of the 2017 Mrs Galaxy UK competition. The final will take place on Thursday 9th March at the Park Hall Hotel in Lancashire, with the winner being flown to Orlando, Florida to compete in the international Galaxy Pageants.

Says Kayleigh: ‘The Galaxy UK pageant is a beauty pageant with a difference. There are no height or size restrictions and unlike most other pageants, women can be mothers and/or married as there are Ms and Mrs categories, as well as Miss and Junior Miss. There are also other awards available, including Best Smile and Miss Congeniality.’

The Mrs Galaxy UK competition has four categories: interview, fashion wear, swim wear and evening wear. The interview gives the judges the chance to find out more about the contestants and what they’ve been up to since gaining their regional titles. The international final follows the same format, but with competitors from all over the world. The current Mrs Galaxy is a winner from the UK so there’s a lot to live up to!

Adds Kayleigh: ‘Galaxy encourages the girls to do as many public appearances as possible to help local and national causes. As part of my reign, I’m raising funds for Galaxy’s chosen cause, The Christie Charity, which provides enhanced services in respect of cancer prevention. So far, I’ve held a raffle, done a bungee jump and will also be holding a bake sale. My aim is to raise £600 and I’ve reached £400 so far. I’ve also donated to food banks, charity shops and a care package scheme for those with chronic illness.’

Kayleigh’s quest for international success is sponsored by the Colwick Hall Hotel, where she held her wedding reception with husband, Ryan. ‘They’ve been so supportive and I’ve even written a blog for them as part of my title year,’ says Kayleigh.

If you’d like to support Kayleigh’s fundraising efforts for the Christie Charity, you can donate online at her Just Giving page: www.justgiving.com/Kayleigh-Brooks.

Congratulations to Kayleigh on your success so far and good luck in the UK finals!