Volunteers from the Ruddington Neighbourhood Plan (RNP) team say they’re delighted that residents have overwhelmingly backed their vision for our village in the referendum held on Thursday 22nd July 2021.

Once counting was completed after the polls closed at 10pm, it was revealed that 1,068 votes were cast, out of which an overwhelming 91.2% of villagers had voted in favour of the Plan with just 8.5% against. There were 3 spoilt ballot papers.

This ringing endorsement means that the policies on the development and use of land in our village that the RNP contains will now carry legal weight.  In future, Rushcliffe Borough Council must consider the plan in relation to all planning applications and appeals. Moreover, with the Plan in place, 25% of the revenues from the Community Infrastructure Levy arising from local development will be paid directly to Ruddington Parish Council, to be used on projects that will benefit our community – which is significantly higher than before.

Paul Reedman, of the RNP team, says: “We were really pleased with the overwhelming support the Neighbourhood Plan received in the referendum. Our village now has a real say in future development in the Parish.”

Mike Gaunt, who is both a Ruddington Parish Councillor and Rushcliffe Borough Councillor, agrees: “This is fantastic news for Ruddington after many years of dedicated hard work by an amazing bunch of local Ruddington volunteers. Hopefully now having a Neighbourhood Plan can mean that Ruddington will be able to engage positively in the local planning around our village rather than feeling like we are always fighting against it. A really special thanks is needed for all of those involved as it has been a long and difficult process for them. Thank you!”

He continues: “I will now ensure that the Neighbourhood Plan is properly used and implemented by the Parish and Borough.” 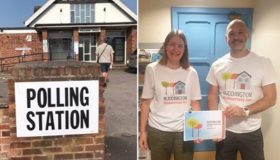 Fellow Borough Councillor, Jen Walker, comments: “Wonderful! Thank you all for your hard work” whilst former Parish Councillor Barbara Breakwell adds: “Well done to everyone who contributed to the formulation and adoption of the plan.”

However, given the importance of the plan for Ruddington’s future, the delight that the vast majority of voters approved it is tinged with slight disappointment that only 18.44% of residents eligible to take part actually did so. This was despite extensive local publicity about our important referendum, some good weather and the option to vote by post.

However, Paul Reedman responds: “The turnout in local votes is, traditionally, quite low and we were very satisfied with the number of people who turned out to endorse the Plan.”

For those concerned about future overdevelopment of our village, its adoption can’t come a minute too soon, with the spectre of thousands more houses being approved on Ruddington’s Green Belt by 2038 due to the the ‘Greater Nottingham Strategic Plan – Growth Options Consultation published by Greater Nottingham Planning Partnership. If rubber-stamped, these proposals would effectively ‘join’ Ruddington with neighbouring villages and conurbations.

You can read about what happens next with The Neighbourhood Plan at www.ruddingtonnp.org.uk/news.