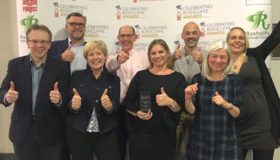 The team behind the Ruddy Good Loyalty Card and Ruddington Village Market has won the Celebrating Rushcliffe Award for “Community Group of the Year” 2019.

Ruddington Village Centre Partnership (RVCP), which only formed in April 2018, was recognised for galvanising village centre businesses into more initiatives to drive footfall to traders. By October last year, they had launched a traders’ Loyalty Card Scheme, promoted with RUDDINGTON.info, followed in February 2019 by a brand new monthly market at The White Horse Inn. They also supported the production of a fun festive video last year called “Twelve Days of Traders,” which promoted Christmas shopping in Ruddington and involved a dozen village businesses and Ruddington Community Choir. 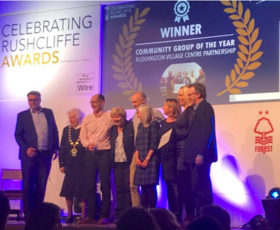 At this year’s awards ceremony, held at Becket School on Wednesday 20th November, the judges said of RVCP: “Their energy and enthusiasm makes Ruddington an even better place to shop.” They beat two other strong contenders, The Friends of Radcliffe Station and Gotham Park Village Project, to pick up the title.

Village Market organiser Stella Dickie told us: “It was just amazing how everyone supported us from the very first market. Early stall holders had the confidence to put themselves forward, and said they’d be part of it, and to them I’m eternally grateful. We also couldn’t have done it without all the volunteers and all the people in the village coming out to support it.” 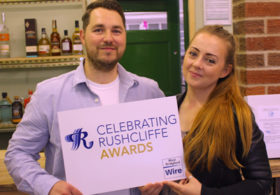 RVCP’s Mark Pinks added: “We’re really pleased. We didn’t expect to win at all. It’s great for raising awareness of the market and to get us more widely known. We’ve lots of big plans for next year to just keep on growing.”

Two other Ruddington businesses, The Bottle Top (pictured left) and Quotient Sciences, were both nominated in the ‘Business of The Year’ category but lost out to winners Hanwell Wine Estate in Hickling – who are actually regular stallholders at our Ruddington Village Market!