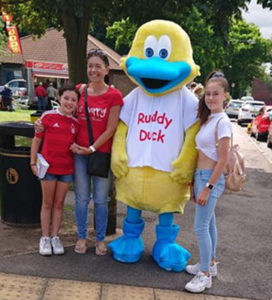 Saturday 20th July saw the return of the Ruddington Summer Fayre on the Village Green. The weather forecast suggested several seasons in one day and we certainly got that, with the day starting in warm summer sunshine, moving on to some torrential downpours of rain and ending in a lovely summer evening!

Luckily, the weather remained dry to start and we were delighted that Ruddy Duck was able to make his debut and open the Fayre with an appearance on the stage. He then did a walkabout where he was followed by excited children wanting to say “Hello” and have their pictures taken with him.

Throughout the day we had a stage full of varied acts, all expertly compered by Ron McSweeney. The performances started wonderfully with the delightful Sway Street Dancers showcasing a number of individual and group dances. 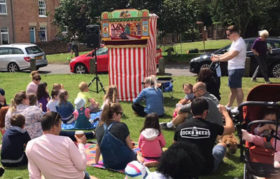 The ever-popular Ruddington Community Choir then performed several numbers and were followed by the great spectacle of the Ruddington Belly Dancers, who attracted a number of younger audience members to join in.  Punch and Judy were just able to get their first show in before the rain came down!

Despite the falling rain, Erika of Zumba Gold put on a brilliant display of Zumba and managed to encourage a group of over 10 people to join in the class. This was followed by a great performance by Jane Gray and her band who sang through the rain. Despite the speakers being covered in bin liners for protection from the water, the music was still heard across The Green. Ron McSweeney then performed a great set of songs before a final performance from Jane and her band. 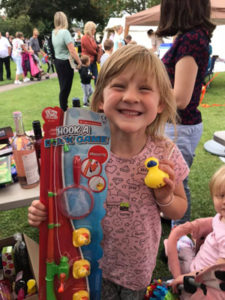 On a positive note, the rain added a great dimension to the prizes given out to the lucky 10 children who found a mini Ruddy Duck hidden round the Fayre and won their own “Hook a Duck Game” – because of the large puddles that formed in the downpours they were able to play with their ducks straight away! And the rainy weather didn’t stop people enjoying the fair rides and trampolining, whilst the full-sized Hook a Duck was as popular as ever.

Running alongside all the acts, we had plenty of stalls busy with crafts, tombolas and various options for food. Meanwhile, Ruddington Kids provided mini tennis activities, Chris gave taster sessions of Petanque, and the Nutsmobile from @Nottscricket came along and battled through the rain to offer bowling practice.

A huge “Thank you” goes to Jean Greenwood for drawing the raffle at the end of the day. Some amazing prizes were won and we raised a great total of £594 for the Scout Hut Roof Appeal. As always, thanks also go to the local businesses and individuals who provided the fantastic prizes for this raffle.

In summary, it was a thoroughly enjoyable afternoon despite the weather. We now look forward to the next event being organised by the RPC Events Team: the Kite Festival on Saturday 1st September in the Kite Field at Rushcliffe Country Park.