On Saturday 8th July, Ruddington Village Museum presented a collection of World War One artefacts at the Local History and Archaeology day organised by The University of Nottingham Museum. The event featured various local history groups and archaeological societies. Organisers were able to build on the success of the previous year’s event, creating an enjoyable and informative day for all.

At the Ruddington Village Museum display, visitors were able to view a range of fascinating World War One artefacts, many of which have a special connection to Ruddington.

As visitors entered the exhibition, one of the first artefacts on display was a striking costume dress which was hand-made to illustrate food rationing, which came into effect in spring 1918. The dress is decorated with coupons for different foods which were rationed. 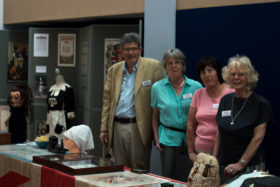 Also prominent among the exhibits was the large Union Flag which decorated the Ruddington War Memorial at its unveiling by the Duke of Portland on 19th May 1923.

The more unusual artefacts sparked the most interest from visitors, especially a decorative mat worked by a blind serviceman helped by St Dunstan’s, a charity which rehabilitated servicemen who lost their sight in the war.

Other textile artefacts featured in the display included a tea cosy and runner worked with traditional Dutch scenes by the donor’s father while in a prisoner of war camp hospital. Also on display were a souvenir celebrating the rebuilding of Ypres Cloth Hall, and a cushion cover embroidered by a Ruddington resident to celebrate the end of the war, bearing the legend ‘Victory and Peace’.

The exhibition formed part of a series of World War One centenary events taking place in Nottinghamshire up until November 2018.