The Nottinghamshire Heritage Forum, in collaboration with local organisations and museums including Ruddington Village Museum, has conducted a commemorative event with Nottinghamshire County Council to mark the centenary of the first day of the Battle of the Somme, one of the deadliest battles in British military history. 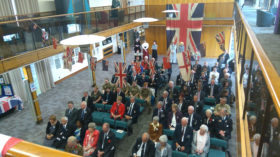 There were also representatives from local museums including Ruddington Village Museum in attendance, who were dressed in traditional garments of the time as part of the experience. The Heritage Forum provided a variety of displays and a special showing of a World War One propaganda film, which were seen by attendees.

The film was originally seen by over 20 million people within six weeks of release, and some Ruddington residents at the time petitioned against it being open for viewing to children for just a penny on weekends.

The fascinating displays included exhibits from local museums and the Nottinghamshire Heritage Forum, which showcased interesting artefacts and information about the impact of the First World War on the area.

The event was the first of a series coordinated by the Heritage Forum, with the film set to be shown at six local venues in the coming months.