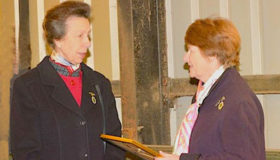 A volunteer who has dedicated over 30 years of her life helping to run our village branch of the Riding for the Disabled Association (RDA) is celebrating receiving a special “President’s Award” from Princess Anne.

Founder member and trustee, Diana Haddon, was recognised for “working tirelessly and showing exceptional dedication” to the RDA service at Ruddington Riding for the Disabled group during a visit to the region by Her Royal Highness The Princess Royal.  Diana was among a number of volunteers from our area who were given RDA long service awards and rosettes at a special gathering in Derbyshire last month. She was nominated by Clarissa Howkins, who was the RDA North Midlands Regional Chairman in 2018. The President’s Award recipients were then chosen by the Princess herself, as she is the President of the Riding for the Disabled Association. 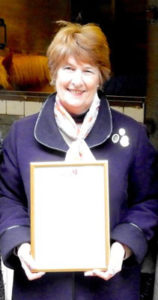 Patricia Steven, from our village branch, said: “Members of the Ruddington RDA Group were proud to support Diana Haddon when she was presented with the RDA President’s Award by Her Royal Highness The Princess Royal at the RDA Mid-Derbyshire 40th Anniversary celebrations held on Tuesday 15th January 2019 at Tansley in Derbyshire. Di was recognised for her exceptional dedication to the Ruddington RDA Group. She was a Founder Member of the Group and has worked tirelessly for the past 30 years contributing to the smooth running of the Group by simultaneously holding the roles of Hon. Secretary, Coach, Trustee and First Aider, and fundraiser.”

Ruddington Group RDA is a registered charity run entirely by volunteers and is totally self-funded. The group holds fundraising events in our village several times a year. At the Group’s 30th Anniversary celebrations in 2018, Diana was also presented with a 30 Years’ Long Service Award.

Diana told RUDDINGTON.info: “I’m delighted. But it’s not just about me. It’s about the whole Ruddington group who were behind me – and I couldn’t have done it without them.” Speaking about being introduced to the RDA’s Royal patron, she said: “It was a great honour to meet her, and she was very interested in the fact that I am a Founder Member of the Group which was started in 1988. We started riding at the Nottingham Equestrian Centre in Ruddington, taking children from Nethergate School in Clifton. We still take children from Nethergate, which has now become an Academy.” 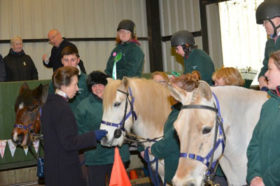 When the former equestrian centre at Lees Farm on Asher Lane closed down, the Ruddington Group was forced to relocate out of the village – and now operates on a Thursday afternoon during term time at The Meadows School of Riding in Normanton-On-Soar. Diana adds: “Riding helps these children with special needs in many ways. It strengthens the body generally, helps with their balance and core strength. It helps with communication, understanding and acting on instructions. According to their teachers, riding is the highlight of the children’s week.”