The 3rd Xmas Fayre held in Ruddington saw greater numbers of people attending compared with the previous year. Despite the poor weather, the village turned out in force to support the event, which was organised by the Parish Council.

The high winds prevented the marquees from going up on The Green, but other venues offered indoor space so many of the stallholders managed to set up and sell their wares.

The Council staff and volunteers worked hard all day long to make the event as safe and successful as it could be, despite the weather.

Innovations this year were popular: the children’s’ rides on The Green, the closure of High Street, and the switching on of the tree lights being obvious examples, but also the dancing displays and the choirs singing all helped create a festive atmosphere. 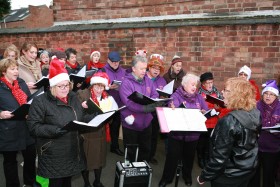 So many people said ‘thank you’, and I’d like to say thank you as well. Firstly, to the Councillors who gave so much of their time; next, to the staff who worked over and beyond what is normally expected; and, finally for now, to the public because there was no trouble, hardly any litter at all (much less than your average Saturday despite the numbers).

The shops and restaurants did a good trade and the feedback that I have received suggests a ‘more of the same please’ for next year. We’ll do our best, and hopefully we will have a solution to the high winds problem as well.

To sum up, this event is now firmly embedded in the calendar and the visitor numbers confirm that it is something that people want to support, and which they enjoy.