Okay, so it’s January and the decorations are coming down. But there’s still time to reflect on November’s very successful village Christmas Event – with a view to repeating it again this year.

The 2014 activities were co-ordinated by the Parish Council and were one hour longer than the year before – from 3pm to 6pm on Saturday the 29th of November. The event was also expanded out of St. Peter’s Rooms into the parish church and The Hermitage. This allowed more traders and attractions to complement the extended opening hours of (most) Ruddington shops. Many had created a seasonal window display and opted to have illuminated real Christmas trees installed on their wall, making our village look and feel incredibly festive!

The weather was kind and hundreds of visitors came along from within Ruddington and further afield to shop, see Father Christmas and sing along to the carols in St. Peter’s Church. The colourful array of varied stalls within the church itself was a first for the village. It was also great to see so many local groups and organisations getting involved. The queue to meet Santa was as long as ever! A very popular new attraction was “Picture in a Manger” (see photo) – a chance to be part of The Nativity scene in a marquee beside The Hermitage. 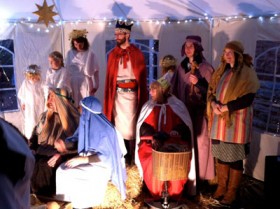 Most people have hailed it a great success. Now suggestions are welcomed on how to make Ruddington’s 2015 Christmas Event even better!