On the 12th October 1854 a Russian shell had landed inside the trench at the Siege of Sevastopol, its fuse still burning. Francis Wheatley attempted to put it out with his rifle butt. Unable to do so he lifted it up and threw it over the parapet where it exploded, thus saving the lives of his comrades. He received his Victoria Cross from Queen Victoria on 26th June 1857 at an Investiture Parade in Hyde Park.

On 10/8/1821 Francis Wheatley son of Francis Wheatley, framework knitter, was born in Ruddington. Some years ago a failed attempt was made to find the exact address but without success. Instead a plaque with a photograph was unveiled in St. Peter’s Rooms on 11/10/04 by the then Parish Council Chairman, Margaret Thorpe. Since then a replica V.C. has been added – given by a generous local donor. 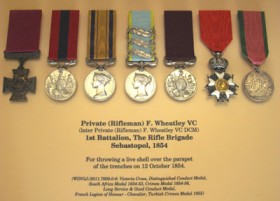 Whether he followed his father into framework knitting is not known, but soon after he reached 18 he enlisted in the 1st battalion of the Rifle Brigade on 5/11/1839. He served for 21 years, 12 of which were abroad: in Malta (5 years), Cape Colony (5 years, where he was in the Kaffir Wars from 1846 to 1847). In 1854 he went to Russia and was at the battles of the Alma, Inkerman and the Siege of Sevastopol. Francis was obviously a very brave man because on 11th October 1854 he was awarded the Distinguished Conduct Medal. The following day on the 12th he earned the newly established award, the Victoria Cross.

This article was prompted my seeing his medals at the Royal Greenjackets’ Museum at Winchester. The museum kindly provided the photograph. Francis is also commemorated on the Nottinghamshire V C Memorial at Nottingham Castle which was unveiled on 7/5/2010.

Francis Wheatley died on 21st May 1865, aged 43, in Westminster Hospital and was buried in Brompton Cemetery where a stone was erected only in 2001.