During an incredibly mild Autumn when October arrived it was predicted that the warmest ever UK temperature for the month might be reached.  And so it was – in Ruddington! 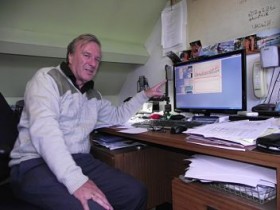 At just after 4pm, on Saturday 1st October, Steve Mills’ high tech Oregon Scientific weather station on Paget Crescent recorded a new all time high of 29.8°C – a statistic that was instantly accessible on computers around the world via his rather impressive and comprehensive internet site.
IT expert Steve’s keen interest in meteorology began whilst learning to fly (he got his pilot’s licence 11 years’ ago).  He first put Ruddington’s weather on the web back in 2006.  Since then he has recorded not only all the highs but also the lows – minus 16°C is our minimum so far.  There is a complete record of rainfall, humidity, air pressure, wind speed and even the UV index during our sunniest days!  This combines with networked data from wunderground.com “to provide an even more accurate weather picture and forecast than the Met Office” claims Steve.  “I’ve also installed a time lapse camera at the front of the house showing the ever changing weather patterns in the skies of Ruddington”. 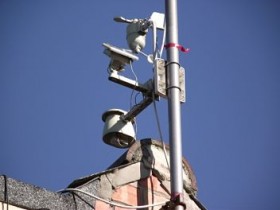 Sure enough the roof of his house bristles with meteorological equipment all linked by radio sensors.  There is an anemometer, weather vane and hygrometer assembly along with a rain gauge, barometer, UV sensor and camera – all recording data every five minutes and feeding it first to his weather station then automatically onto the internet.
Global warming?  “I’ve not really seen any evidence over the past five years” says Steve.  “But we do seem to be getting earlier winters – and it looks like this year will be no exception!”
You can visit Steve Mills’ Ruddington weather web site at: http://www.sandcmills.net/Flying/Weather/PHP/wxindex.php
(Researched & written by Graham Wright)