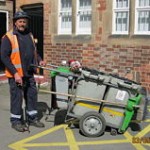 Ian Wilbraham is a very well known character in the village, usually seen in the mornings pushing his sweeper’s barrow adorned with plastic flowers, Christmas trimmings and other items picked up during the course of his duties. After three years in the post as street cleaner, Ian has become another victim of the recession as Rushcliffe Borough Council has removed funding for his post. Ian finishes at the end of June.

Ian, whose wife Sue works in the Co-op, will be sadly missed not only for the work he does within the village but also for his cheerful smile, chatter and jaunty seasonal hats. There are not many jobs that are based outdoors, mixing with all sorts of people in all weathers – but Ian is hopeful that there might be something out there for him.