Last month saw the first birthday of the Ruddington Village Centre Partnership (RVCP), which was formed in response to the rising number of key retail closures on the high street. Prompted by the closure of the sorely missed Thomas’ Greengrocers, a special Parish Council meeting took place last spring to discuss what the Parish Council, businesses and the community could do together to support and encourage the high street economy – and RVCP was formed on 23rd April 2018. 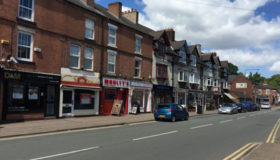 In its first year, the partnership has launched a number of successful initiatives including the Ruddy Good Loyalty Card and Ruddington Village Market. We’ve also received encouraging reports from businesses on the positive impact these have had on trade and gained welcome support from Rushcliffe Borough Council’s Economic Development team.

“We’re immensely proud of all that RVCP have achieved in its first 12 months,” said Mike Ader, Chairman of RVCP. “The group is looking forward to more exciting projects in the year ahead, with the expansion of the Market, ambitious plans for the next phase of the Loyalty Card scheme, and a series of workshops and seminars for traders with key speakers. “But the high street can only survive with the most important RVCP partner of all – the shopper!”

So, the message from RVCP is: “Shop local, shop Ruddington”.