A £350,000 scheme to improve safety for cyclists at the north-western end of the village has been completed.  The project on Wilford Road and Clifton Road has involved widening pavements and relocating bus stops and even a pillar box. 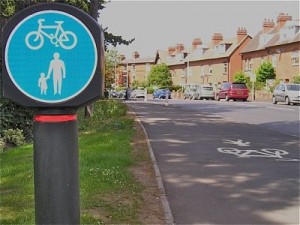 As well as markers along the cycle path, larger blue signs have now been erected to indicate the correct route through the village.  It connects to the existing cycleway from Wilford at Sellors Playing Field and allows cyclists to stay off the road up to Clifton Lane – and then as far as the junction with Churchill Drive.  New marked parking bays have been incorporated into the scheme that also involved resurfacing the highways and the installation of interactive speed signs.

Cyclists are being urged to use the new cycle paths as a safer route through the village – but pedestrians should also be mindful that they now share some pavements with bikes!
(Researched & written by Graham Wright)