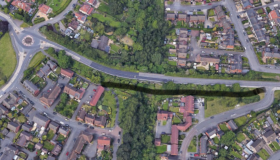 Villagers frustrated by the lack of progress in building a safe and convenient pedestrian access to their homes may finally have some good news!

Nottinghamshire County Council has revealed that moving things forward is now just a signature away – meaning the long awaited footpath/cycleway from Clifton Road via the Old Station Drive development directly into the Pasture Lane Estate (see aerial view above) can then be constructed. Residents’ anger even prompted them to start a petition to the County Council and Crest Nicholson Homes this week. It details how hundreds of Ruddington residents are now faced with a dangerous daily walk – along a single, narrow footpath over the former railway bridge beside the busy Clifton Road. This is currently their only access to the northern end of the village because the safer parallel route which appeared on plans by the property developer over ten years ago was never built. 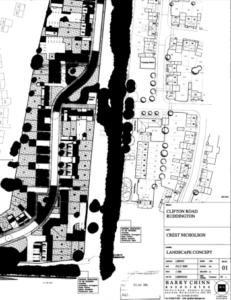 Villager Barbara Breakwell explains: “When I was a Parish Councillor in 2011 I started this campaign in response to the concerns of a Pasture Lane resident. I initially approached the Planning Department of the Borough Council, as research showed the conditions for the original planning permission for this development stated that a footpath should be created “allowing people to avoid the bridge.” It wasn’t built. I also discovered that when planning permission was sought for the Station Road Development, by Crest Nicholson, in 2007 they proposed a footpath parallel to Clifton Road, presumably to enable their residents to access Pasture Lane/ Clifton avoiding the bridge. Once again none was built. Our local County Councillor, Borough Councillors, Parish Council and Governors at James Peacock School have been supporting and lobbying along with me over the last seven years.”

In fact, it was County Councillor Reg Adair at last weekend’s Councillors’ Surgery who advised concerned residents Jennifer Tinsley, Kay Garrett and Claire Harris to begin a petition – which he could then present to the next full Council meeting on July 12th on their behalf. Jennifer told us: “Thanks to the help of the Ruddington Community Association and Ruddington Neighbourhood Plan team an online petition has been set up and local residents can take positive action and have the means to make their feelings known about the ongoing, daily problem of not having a path that is fit for purpose. The strength of feeling on this issue, particularly for those of us that use this path is palpable. No-one wants this project to be completed after an incident. One of my children has fallen on the current path and their scooter ended up in the road, narrowly being missed by a vehicle – I dread to think what could have happened! It’s time to sort this out.” 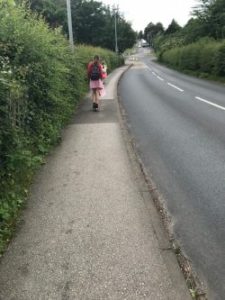 The existing footpath alongside Clifton Road over the former railway line

Kay agrees. “While we’ve been assured that this has been approved and funding ringfenced, we have yet to see any outcome. There are hundreds of residents with only this route to the village, and this number is increasing with new housing. It’s a highly dangerous path, right next to the busy main road, and especially hazardous in winter. We’d like to see an end to these delays over what should be a simple solution, and offer residents a safer route into our lovely village.”

Claire adds: “I believe the new path is vital to ensure the safety of not only the residents of the new estates but for the whole community and beyond. If we are to encourage people to cycle or walk into our village and make use of the shops and facilities, there needs to be a suitable route to do so.”

The ownership issues on the land required to accommodate the new right of way have been quite complex. Even though Nottinghamshire County Council had previously bought land from the former railway company to create an access through to the Persimmon development it seems that Crest Nicholson retained a so-called “ransom strip” between the two housing sites. When Bellway Homes secured planning permission for its own development further along Pasture Lane it was on condition of paying a £50,000 “Integrated Transport Contribution” – most of which was destined to fund the footpath. But it seems the various parties have been struggling to reach any mutually acceptable agreement about who will pay what ever since! 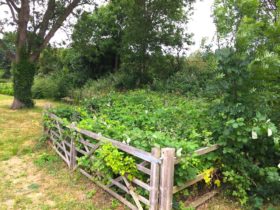 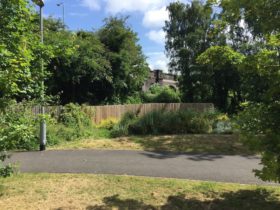 …and where it will emerge into the Pasture Lane estate

RUDDINGTON.info approached Crest Nicholson for a statement earlier this week. They simply told us: “We are working closely with local stakeholders, including Nottinghamshire County Council, to support the construction of the footpath on this site.”

Subsequently campaigners have been sent a letter from Nottinghamshire County Council’s Property and Estates department saying that Crest Nicholson have just confirmed that they are ready to sign the Highway Dedication Agreement required! It adds that NCC’s legal team expect to be able to able to complete this matter very quickly following completion of the documentation – when their Highways agent Via East Midlands can then take matters forward.

Despite this sudden progress campaigners are urging residents to keep the pressure on by continuing to sign their “Create a safe access route for Ruddington residents” online petition – which already over 500 people have done. You can find it here.

(RUDDINGTON.info also thanks Craig Baum for his help whilst researching this article.)