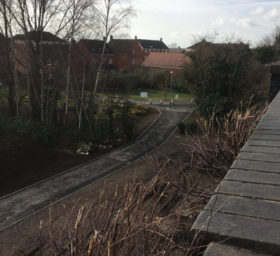 Since the houses on the former site of Cooper and Roe on Pasture Lane were built, residents living in this part of Ruddington have only had one pedestrian access route to the village centre. This involved using the footpath over the old railway bridge on Clifton Road.

Residents have continually expressed concern about the footpath’s narrowness, lack of gritting in the winter and the proximity of road traffic.

A few weeks ago, work began to create a “safer route” at ground level from Cooper Gardens across the old railway bed and exiting onto Old Station Drive. The combined cycle / pedestrian path is rapidly taking shape and should be completed in the not too distant future.