Ruddington Business Centre customers received an unwelcome letter from Santander in the post back in February informing them that “later this year we will stop providing Santander banking services” in the village.

The agency closure at A M Girling & Co Accountants is apparently in line with a new Santander directive to shut ALL its UK agencies this year.

It is likely to be a particular blow to its older customers who are not able, or unwilling, to access online or telephone banking. Less mobile clients may also be unable to travel to the nearest main branches in West Bridgford or Nottingham city centre. 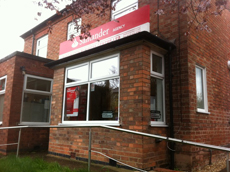 This follows the HSBC Bank branch closure in Ruddington four years’ ago which led to many of its customers switching to Santander instead! Our local Santander agency will cease trading at the end of next month.

After first taking over the Bradford and Bingley agency in the village in 2004, operating from premises in 13 High Street, Santander then moved along to 11 High Street in 2006.

Girling & Co Accountants, the other separate business that operates from the site, remains unaffected. They told us “It is hoped that a suitable replacement banking agency provider can be found. The owners of the Business Centre, accountants Andrew & Adam Girling, would like to thank all customers for their support.”

Meantime the Santander agency will continue to operate as normal up until 12 noon on the 28th of July 2014.