Ruddington Parish Council agreed, at a meeting on 8th September, to enter negotiations for the sale of Sellor’s Playing Field. Councillors present voted ten to one in favour.

Members of Ruddington Parish Council say any sale would fund additional play facilities on a new, bigger play area a couple of hundred metres away and the development of a new community centre to replace the Village Hall.

During the meeting 17 residents aired their frustration at the idea of new homes being built on the park, 3 spoke in favour. 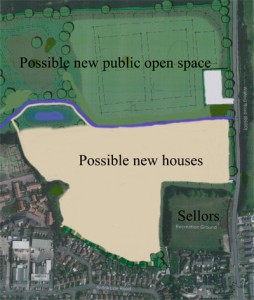 Councillor Allen Wood, Chairman at Ruddington Parish Council, said: “Councillors listened carefully to what was said at the meeting, which was clearly overall against. Importantly, the views of more than 1,000 people who responded to the survey needed to be taken into account. Parish councillors work for nothing for the good of Ruddington and took the decision they thought best for the whole of Ruddington.

“The benefits of a new community centre would be that there will be a much better facility for people, young and old, to use.”

More than 1,000 residents took part in a public consultation over the proposal. The only option to receive more ‘acceptable’ responses than ‘not acceptable’ was the one that outlined plans to sell the playing field, sell the current village hall, create new public open space on land north of Packman Dyke and build a new community centre. This is the option that the Parish Council agreed to follow up.

If a deal is struck, a final decision to go through with the sale will need to be taken by the Parish Council. Bloor Homes will also need to submit proposals to Rushcliffe Borough Council for planning permission.

The Borough Council has been told by the Government it must find space for additional housing of which 584, with 250 in the Green Belt, have been allocated to Ruddington.