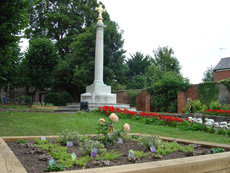 A Parade and Service of Remembrance will be held at the War Memorial on Church Street, 10.45am on Sunday 8th November, followed by Morning Service at St. Peter’s Church.

Weather permitting, the parade of local organisations headed by the Ruddington Detachment RHR Corps of Drums and Bugles will march to the War Memorial before the service.

Members of the public who are driving to the service are asked to park respectfully and to arrive in plenty of time as road closures will be in place for the duration of the event.

The Ruddington & District Branch of the Royal British Legion launched the 2015/16 Poppy Appeal at their Autumn Fair on Saturday 24th October. Last year in the Ruddington District just over £11,000 was raised which went towards helping and supporting Armed Forces Veterans and Families in need.

This year the first poppies were sold by Cadets from 2425 (Nottingham Airport) Squadron to long serving supporters of the Poppy Appeal.