Beginners, women and girls joined together at Rushcliffe Country Park’s new skate park to have a go at the sport as part of the official opening celebrations on Saturday 14th August. 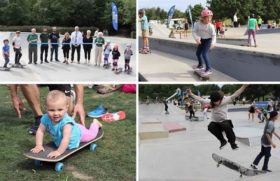 The sessions were provided by Skate Nottingham and included women, girls, including non-binary or LGBTQ+, with instructors on hand for guidance and then all BMX and wheeled sports joined the jam from 11.30am.

Prizes were awarded for various achievements, from beginner level through to advanced.

The £210,000 skate park opened in June, perfectly timed to capture the legacy of great achievements by Britain’s skateboarding and BMX athletes at Tokyo’s 2020 Olympics.

The park was funded by Rushcliffe Borough Council and supported by Skate Nottingham, Canvas Spaces, and VIA East Midlands.