Construction work is underway on a brand new plaza style skatepark in Ruddington – which should be ready for use in April. 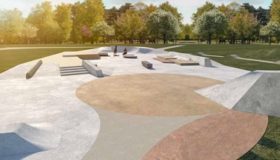 Rushcliffe Borough Council (RBC) is building a replacement concrete facility at Rushcliffe Country Park which has been designed by Canvas (top image) in close collaboration with the young people from our village and elsewhere who will use it.

It’s hoped the contemporary skatepark will meet the needs of future Olympic skateboarders and BMXers from Ruddington and the surrounding areas.

The first job for the workmen who’ve moved on to the site was to remove the old wooden structure which had reached the end of its useful life and was closed last year on safety grounds.

RBC has developed this project alongside social enterprise Skate Nottingham, science education charity Ignite! Futures and Nottingham Trent University – who’ve involved young people in co-designing the new facility through a series of workshops, held both online and in small, socially-distanced groups. These were attended by local 11 to 18-year-olds, as well as older skaters and BMXers, facilitated by academic experts in architecture, engineering and sports science and mentored by university students – all supported by a grant from UK Research and Innovation (UKRI).

James Hope-Gill, Chief Executive of Skateboard GB, adds: “It is great to see that Rushcliffe Borough Council has a dedicated budget for skateboarding facilities and has really thought about the design of each of their parks individually, rather than duplicating the same forms in each. The existing parks at Lady Bay and Radcliffe have already proved that, with forward thinking and involving the user community from the outset, it has led to two amazing skate parks which are hugely popular for all wheeled users.”

The new skatepark in Ruddington is scheduled for completion in April 2021. By this time it’s hoped the current social distancing requirements on such areas will have been relaxed.

You can find progress updates at the Canvas website.