The choir recently competed in the Derby Arts Festival for the second year running and came away victorious once again.

Last May, they decided to dip their toes in the water of competition by entering the Sacred Music Class at the festival in Derby, which they won with distinction. They were also judged Best Adult Choir overall.

To defend their title at this year’s Derby Arts Festival, they entered both the Sacred Music Class, in which they sang Gwahoddiad and Lux Aurumque, and the Concert Class, in which their pieces were Rule the World, Steal Away, Welsh Prayer and Yfory. 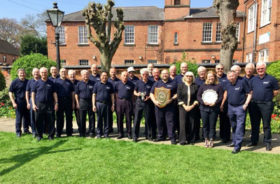 The internationally renowned adjudicator, Bryan Husband, admired their presentation and the contrasts evident in the Sacred Music Class, and awarded them a distinction with an even higher mark than last year.

In the Concert Class, he praised the subtlety and musicality of their performances, awarding them the highest possible grade of “Outstanding”, and making special mention of the quality of the choir’s accompanist, Eleonora Babitskaya.

The mark gained in this class was the highest given to any of the choirs in the whole competition, so South Notts Men’s Chorus again won the accolade of Best Adult Choir, and came away from Derby with a total of three trophies.

If you’re interested in finding out more about this modern, progressive male choir, please email john.stephenson4@gmail.com.