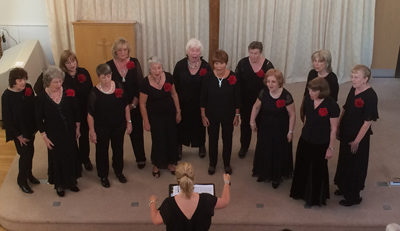 On the evening of Saturday 17 June, a packed Ruddington Methodist Church hosted the South Notts Men’s Chorus (SNMC) and Lyrical SoNGbirds Summer Concert. The audience was treated to a varied repertoire of spiritual, folk, choral and popular music – sung in English, Latin and Welsh – from both choirs.

SNMC recently emerged as winners in their class at the Derby Arts Festival and also received the accolade of “Best Adult Choir” at the Festival. Their next concert will be a performance at the Llangollen International Musical Eisteddfod in North Wales, in early July.

After that, SNMC’s next Nottingham concert will take place from on Saturday 29 July at the new £9 million ‘the space’ venue at Nottingham Girls’ High School. This time, SNMC will be performing with contemporary female quartet, Quadravox (www.quadrovox.co.uk). Doors open at 7:30pm. Tickets cost £12.50 and are available to buy online at www.gigantic.com/south-notts-mens-chorus-and-quadravox-tickets