Ruddington has entertained two young teams from A.G. Grenay, the football club from our French Twin town, Grenay in north eastern France. From Thursday 10th May to Sunday 13th May, we hosted a total of 33 people including the Mayor of Grenay and his wife, 21 children aged from 12 to 15 years and a collection of football coaches and parents. 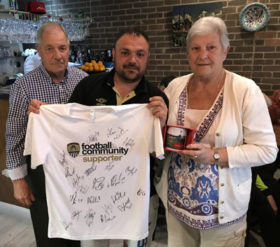 Their stay proved to be a very busy affair with trips to both Notts County FC, where the children were thrilled to meet the Manager, Kevin Nolan, and Nottingham Forest FC. They were allowed into both grounds and enjoyed taking photographs in the seated areas, in the dugouts and so on. Other trips included Notts County Cricket Club where attempts were made to highlight the finer points of the game, Wollaton Hall, Green’s windmill and a ride on a steam train at GCRN.

The focus of the visit, however, was two games of football between Ruddington Colts and A.G. Grenay which were played under the hot sunshine of Saturday 12th May. Both games were played in a very competitive yet friendly and enjoyable manner. First up were the Under 13s. Grenay took an early lead and soon went two goals up but the Colts gradually fought their way back into the game and eventually managed to get a goal back. Grenay tried desperately not to concede a second goal, but the Colts finally got the goal they deserved and the game finished in an honourable draw at 2-2.

The U15s game followed a similar pattern to the first in that Grenay took an early 1-0 lead and could have built upon it. However, they failed to do so and the Colts gradually came into their own, scoring their first goal. The Colts then took a hold on the game and built a 3-1 lead. The Grenay keeper had a superb match between the sticks, but couldn’t prevent two further goals right at the end of the game as Grenay, who were without substitutes, wilted in the heat. The match finished 5-1 to Ruddington Colts. 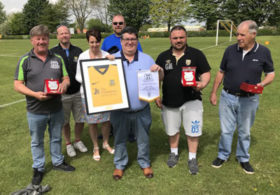 Many people who attended commented upon the camaraderie between both sets of players and supporters and they enjoyed a hearty lunch together, supplied by Ruddington Fish Bar, after the games. A.G. Grenay presented each Colts player with a memento of the day, whilst Colts presented A.G. Grenay with a framed shirt, a pennant and four “Player of the Match” trophies. The winners were selected in each game by the Manager of the opposition team.

It is always difficult to keep costs down during visits such as these. As well as Ruddington Fish Bar, the Parish Council is very grateful to Ruddington Co-op and Ruddington Sainsbury’s, who supplied breakfasts, lunches and drinks for our guests from their Community Programmes.

All our French guests had a wonderful few days but the highlight for everyone, Grenay and Colts alike, was the football and the wonderful spirit in which it was played.