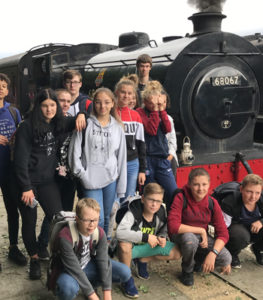 Ruddington has again hosted a visit from our twin town of Grenay in north eastern France. 14 young people and three adults visited from Friday 9th August 2019 until Monday 12th August 2019 and it proved to be a very enjoyable affair for all concerned.

The weekend was a busy one. Numerous activities had been planned, including a visit to GCRN where our guests were treated to a ride on a steam train, as well as rides on the various trains that make up the model railway. They arrived at GCRN in style on a vintage Birmingham double decker bus, kindly supplied by the local enthusiasts who restored it. The bus picked them up at their hotel and took them for a spin before dropping them off in good time for the train to depart.

Other attractions included visits to Green’s Windmill at Sneinton and Wollaton Hall. Ruddington’s new mascot, Ruddy Duck, made an appearance and came to see the children at St Peter’s Rooms. They took to him immediately and enjoyed trying to converse with him in French! 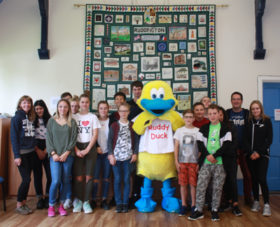 On separate occasions, pizza and a fish and chip supper were kindly supplied by the Ruddington Fish Bar, both followed by competitive, yet friendly, sports and party games. We were very lucky that the weather was kind to us, despite the forecast, so indoor and outdoor games were possible.

The children were very friendly, open and helpful, and were a credit to their home town. Some youngsters from Ruddington came to join us during an afternoon at Rushcliffe Country Park and it was a pleasure to see such lovely interaction between the children.

At the end of the trip, our visitors were presented with a framed copy of a photograph of themselves, taken next to our village boundary sign on Clifton Lane. They were delighted to see Grenay highlighted in the sign. Each person also received a personal copy of the photograph, together with a few small mementos of their visit such as a pen from GCRN and pencil from Green’s Windmill.

It’s always difficult to keep costs down during visits such as these. The Parish Council is very grateful to Ruddington Fish Bar, to Ruddington Co-op for supplying lunches and drinks from their Community Programme, to GCRN for their kindness and generosity, and to Alaturk restaurant in Compton Acres for providing a delicious evening meal.