I would like to thank everyone who attended, took part, helped at and organised Ruddfest 2017. It was an absolutely fantastic
four days; even the odd shower here and there never managed to dampen anyone’s spirit. All four venues work really hard in the run-up to this event, and every year we have stood back and proudly seen it grow.

Local businesses thrive, public transport is full and everyone’s morale is high and, in the world in which we live today, seeing
people mixing and have a great time with friends and family is really touching. 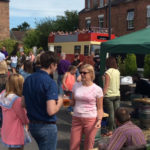 I received an email during the event from a gentleman in his 70s whose opening line was “I had a lovely day (Thursday) at
Ruddfest. Being a pensioner, this means the bit from about 10am- 3pm!” This man had travelled to us from Leicester by train and then caught the number 10 bus with our Event Rider ticket, after finding out about us on social media.

I believe this goes to show that Ruddfest is now well and truly stamped on people’s hearts and in their calendars. Thanks guys for making this the best beer festival south of the river – Ruddington is now definitely on the map!