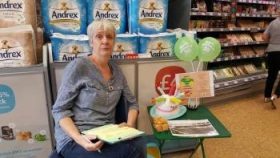 Former Parish Councillor Barbara Breakwell is well known for her proactivity in Ruddington over very many years: helping to run various groups, assisting villagers and businesses to solve numerous problems, addressing traffic issues, and generally making life in Ruddington better for us all.

From establishing Ruddington Fun – to being a James Peacock School Governor – to being the driving force behind getting a safe, new footpath for Pasture Lane residents – to setting up the new Ruddington & District U3A – to donating her own special Royal Oak tree for The Green during the Queen’s Platinum Jubilee this year – the list goes on.

Barbara frequently advises people: “If you see a problem or issue, report it!“ A month ago, she followed her own advice by contacting Rushcliffe Borough Council after spotting that half of her own street, Musters Road, had been “lost”!

“The development at Wilbur Chase meant a house was demolished to create the access road to the site,” explains Barbara. “This resulted in Musters Road literally being cut in half. A new junction was created, with the road into Wilbur Chase being a continuation of the bit of Musters Road from Distillery Street and then becoming Skylark Drive.

“The trouble was, if you drove in from The Green down Distillery Street, there was no street sign to tell you what the road to your left is. I said it was confusing and needed a road sign for Musters Road.”

She adds: “The council agreed and advised me it would take several weeks, as the signs are made by a specialist firm. Well, four weeks later, we now have signs on both sides!”

Barbara urges all residents and businesses to report any issues or problems we see in Ruddington and says: “I do it because it usually – ultimately – resolves it!”