It is with great sadness that we report the closure of one of Ruddington’s oldest family businesses – and our last remaining village car dealership. 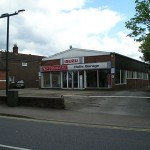 Hall’s of Ruddington can trace its history back to 1924 and has been selling vehicles from 38, Easthorpe Street since moving here in the mid-nineties.  At that time the company held one of Nottinghamshire’s Skoda franchises – but most recently it had been the main local dealer for Japanese manufacturers Daihatsu and Isuzu. However, during May, the company went into liquidation and has now ceased trading – something that became apparent to customers and village residents last month when all the cars suddenly disappeared and the barriers came down.
Site owner Brian Dickman says it’s very sad when a business fails “but the strength of the Pound against the Yen won’t have helped them in this tough economic climate.”  Brian is now waiting to see if anyone will buy the business from the liquidators or, failing this, if another company is interested in moving onto the vacant premises.
Meantime Shine Salon, whose building adjoins the forecourt of Hall’s, has asked us to point out that its business is unaffected by the closure, and that they are continuing to trade as usual.                (by Graham Wright)