On 23 January 1879, the mission station at Rorkes Drift, Kwa-Zulu Natal in South Africa was repeatedly and robustly attacked by 3,000 to 4,000 Zulu warriors, hot-foot from their crushing defeat of the British at the Battle of Isandlwana. Over many hours, the mission station was successfully defended by little over 100 soldiers from the 24th (Warwickshire) Regiment of Foot. The ferocious battle has gone down in history as no fewer than 11 Victoria Crosses (the British Army’s highest award for valour) were awarded to the defenders – all of course commemorated in the classic film ‘Zulu,’ starring Michael Caine as Lieutenant Gonville Bromhead. 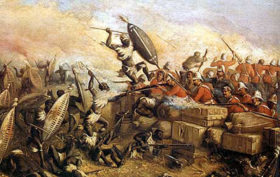 The film ‘Zulu’ represents the 24th Regiment of Foot as a Welsh regiment, when their county designation was Warwickshire until 1881 and only around 15% of the soldiers defending the mission station were in fact Welsh. Three soldiers from the 24th Regiment who fought at and survived the battle (James Marshall, Caleb Wood and Robert Tongue) are buried in the old Shaw Street cemetery in Ruddington. Other local connections include a soldier killed at Rorkes Drift who is buried in another Nottingham cemetery, and Lieutenant Gonville Bromhead being schooled in Newark.

From 12 noon on Friday 16 June, ABF The Soldiers’ Charity – the British Army’s national charity since 1944 – will be hosting a lunch and presentation about the battle for Rorkes Drift at St Peter’s Rooms in Ruddington. The presentation, titled ‘The Ghosts of Rorkes Drift,’ will be given by Charles Aikenhead, the owner of the Rorkes Drift Hotel adjacent to the battlefield in South Africa.

Tickets are £25 per person, including lunch, and are available from Janet Britland, ABF The Soldiers’ Charity, East Midlands. Call 0115 957 2103 or email eastmidlands@soldierscharity.org.