Perhaps so far only Mathew’s Café & Deli regulars have spotted the new face in charge at 24D High Street? But soon the popular Ruddington venue will also have a striking new name and an updated menu. It will then be “Black Cat Café”.

The name has been inspired by the accountancy firm Black Cat Accounting which new owner Julie Smith had been running with her husband. 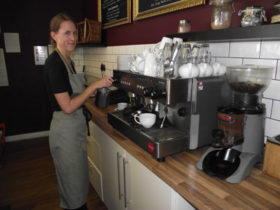 In fact, Julie took over the café from Mathew Mountain back on the 20th August, but she’s new to the trade so decided to change things gradually after seeing what the existing customers like and don’t like.  Within the next month or so the signage will change.

“Although I’m actually a qualified accountant, I have always wanted to own my own café,” explains Julie. “I love cooking and I’ve previously done hotel and catering and baking courses, so now this is my ‘leap of faith’ into the industry! I’d like to build on Mathew’s success and become even more involved in the community.”

That involvement has already begun with the “Renew Ruddington Art & Wellbeing Group,” now meeting there every Wednesday afternoon. This is a new initiative led by Sam Hackett and Ness Greenhalgh from Ruddington Baptist Church.

“I’ll mainly be front of house but sometimes in the kitchen – aiming to prepare tasty and wholesome food that people will enjoy.  I’ll be launching an updated menu soon but keeping the favourites like the popular Breakfast Menu.”

Black Cat Café will still open seven days a week – with longer opening hours planned – especially to accommodate groups who may wish to meet there. So when the Black Cat crosses your path it will be good luck to call in!

From Graham Wright at RUDDINGTON.info