Sadly it’s not been the best couple of months in terms of our village centre businesses. We’ve seen the closure of our Barclays Bank branch and the departures of Westbrookes’ Estate Agents, the Something Special gift & card shop and Pinpoint Accountants from High Street. But, being Ruddington, thankfully enquiries are already flooding in for traders wishing to take their place.

In truth ‘Dhaka Delhi’ already had a place – the former Everest Tandoori Restaurant – and, after being closed for two years, it was reborn with a fresh image and new management on November the 3rd.

Owner Mahbu Noor is already well known to Ruddingtonians because he owns and runs the award winning ‘Three Spices’ Restaurant business behind The Three Crowns pub. 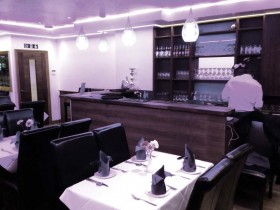 “I think there’s always been a demand for two Indian Restaurants in the village” says Mahbu, “but I wanted to make this one a bit different. So the chef is from a different area of India and brings with him a whole new menu and different style of cooking. Also you can bring your own alcohol – a unique idea for Ruddington – which should make your night out a bit cheaper!”

So why the change of name from Everest to Dhaka Delhi?

“The Everest was a bit dated, needed a lot of work doing to it, and had a bit of a bad reputation” says Mahbu “so we thought we’d take our time and open it as a new venture with our new restaurant manager, Mahbubur Rahman. We hope people like the different look and menu. I’d also like to say a personal thank you to everyone who’s supported me so far during my six years in Ruddington.”

Dhaka Delhi Indian Restaurant is at 21, High Street and is open Tuesday to Sunday evenings from 6pm. It also offers a takeaway menu and delivery service by calling 0115-984-8358.