Ruddington residents who still use their village for shopping have learned with dismay and great sadness that their only remaining butcher’s shop has just closed down.  This is not due to illness or retirement – purely due to a lack of trade from those of us who live here. 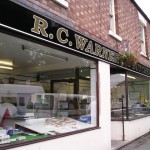 There has been a butchers at 15 Church Street since predecessor T.W Oliver and Sons started it up in 1936 – with Bob Warner and his wife Julie taking over the business in 1999.  Bob had worked there from being a 17 year old apprentice 34 years ago – and so it was an especially upsetting decision to cease trading on the 28th August.

The closure is particularly alarming as Ruddington had no less than FOUR butchers shops as recently as the 1970s – Oliver’s, Wright’s, Preston’s and Millet’s.  Now it seems the village can’t even support one. Bob and Julie say trading conditions were tough even before the recession.  There has been a steep decline in the number of butcher’s shops nationally, as people choose to buy pre-packaged meat from supermarkets instead.  But they have also noticed less and less villagers using the centre for shopping, to a point where it is no longer financially viable for them to continue trading here – and they reckon “Ruddington will soon be a ghost town” if current trends continue.  However they said “thank you, and a sad goodbye, to the few remaining regulars who still used our shop”.

So we now have yet another empty “prime” retail unit in Ruddington.  “Blade Runner” barber’s shop has also ceased training since my “Use It Or Lose It” article.  Need I say more?