If you have been on our local Heritage railway, the Great Central Railway Nottingham (GCRN) from Ruddington you will be aware that the furthest you can ever travel on it is to just outside Loughborough. 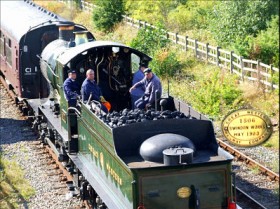 There has been a long held ambition to reconnect our line to the other section of the Great Central Railway to create an 18 mile long heritage railway between Leicester and here.

Unfortunately, the lack of a bridge over the Midland Main Line and the anticipated costs to build one has made it remain an aspiration for several years.

However, recent work at Reading station has rendered two bridge decks surplus to requirements and Network Rail have offered to run the project to install them over the Midland Main Line, close to Loughborough Railway Station.

The timelines are tight to raise the £1,000,000 that the installation will cost as it has to be built by 2015 before the Midland route to London is electrified. An appeal, “Bridge to the Future” was launched on June 1st 2013 and by the end of November 2013 £280,000 had been raised. If you would like to help make this link move a step further any donations to this project would be welcomed. Further details are available at www.gcrailway.co.uk/unify or talk to the volunteers at the Heritage Railway Centre on the Country Park.