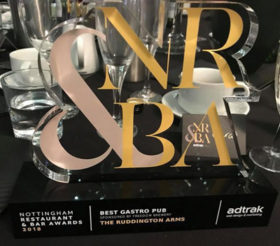 One of our village inns has picked up another award for the quality of its cuisine – as Nottingham’s “Best Gastro Pub”!

The Ruddington Arms received the accolade during a black tie ceremony on 31st January, hosted by TV personality Mark Durden-Smith at Colwick Hall. The annual Nottingham Restaurant & Bar Awards celebrate diversity and quality across every style of dining, recognising the most talented chefs and venues within the region – “allowing the best of Nottingham to be showcased on a plate!” Ruddington’s White Horse Inn can also be proud to have been named as one of the runners-up in the same category. 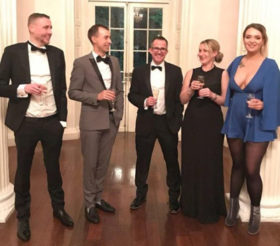 It’s another Ruddington Arms gong to add to a shelf full of awards since the failing “Jolly Farmers’ Inn” was refurbished, rebranded and reopened in April 2014 by acclaimed chef Mark Anderson and his wife Sarah, following a £250,000 makeover. Since last summer, Sarah has been concentrating on launching the couple’s new pub venture, The White Lion in Bingham, but Mark is still usually to be found doing what he does best in the kitchen at The Ruddington Arms!

And it’s certainly paid off – although it sounds as if this latest award was a bit of a surprise. On the night of the awards, the RA team posted on social media: “Didn’t see that coming. Thank you so much to everyone who voted and especially the team. Love you all xx”