In the middle of the 19th century before football became the popular sport it is today, cricket was the only team game of any importance. Matches between neighbouring villages were big social occasions.

Large numbers of framework knitters became professional cricketers during the summer, contributing to the high standard of the Nottinghamshire teams. According to a quotation from an 1892 edition of the Cricket Weekly Record, “Ruddington has been from time immemorial almost a nursery for the Notts County Eleven.” 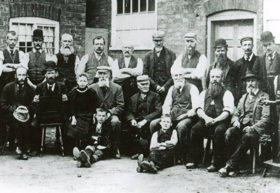 Peter Wynne-Thomas is the Archivist at Trent Bridge and Vice President of Notts County Cricket Club. On Tuesday 6th August, he’s coming to the Framework Knitters Museum to talk about the history of the sport and its Ruddington’s involvement with it.

The event starts at 2.30pm in the Chapel. Tickets cost £5 each and are available from the museum or by calling Kathy on 0115 984 5375. Light refreshments are included.

Copies of the booklet “Professional Cricket and the Ruddington Framework Knitters” by Brian Wright will be on sale at the event.