September 2008 saw the retirement of Gordon Dolman from the garage business founded by his father over 60 years earlier. Gordon’s father, William Henry (Bill) Dolman, was apprenticed to the long established Nottingham coach builders, Challands Ross before WW2 and, after service in the RAF, he opened his own business in 1946 at Harry Buttery’s property on Easthorpe Street – known to many in later years as Hall’s Garage. 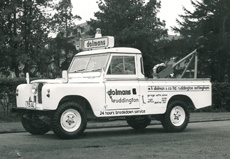 In 1954 Bill Dolman moved to Distillery Street, the site being known as Burrow’s Yard and housing Phil Sowter, plumber, also a wheelwright and Phil Burrows himself making coffins. Bill was joined by his two sons, Michael in 1955 and Gordon in 1957.

In 1965 planning permission was obtained for the current garage building and it also saw the death of Bill Dolman. The business was incorporated as W.

H. Dolman & Co. Ltd. in 1966. Barrie Astle, who joined the company in 1968, had started his career at Alfred Cook Machinists Ltd on Parkyn’s Street who had in their time built framework knitting machines – two of which are in our Framework Knitters Museum. The lure of the internal combustion engine soon took him to Grice’s Garage and then onto Hooleys (main Ford agents). With this experience under his belt he joined Dolman’s, retiring 39 years later in 2007. Michael Dolman left the business in 1986.

Dolman’s did a lot of heavy vehicle work for companies such as O. J. Bradbury, Greenwood Boxes, Lyons and Neilson’s Ice Cream, Basford RDC and, for over 40 years, recovery work for Nottinghamshire Police.

It was Barrie’s retirement in 2007 and MOT tester Lee Jones-Barlow’s accident that signalled Gordon’s own retirement on 30th September 2008. He now enjoys life not far from Ruddington with his wife, Janet, and several classic cars and lorries.