An ice dancer from Ruddington has secured her place on Team GB at the 2018 Winter Games in PyeongChang after winning an Olympic qualifying competition.

Penny Coomes and figure skating partner Nick Buckland, who hails from Wilford, built on their initial lead in the “Short Dance” section with victory in the “Free Dance” at Oberstdorf in Germany – so lifting the Nebelhorn Trophy.

This victory means that South Korea will now be the third trip to a Winter Olympics for our local duo, having also represented  Team GB at Vancouver in 2010 and Sochi in 2014. 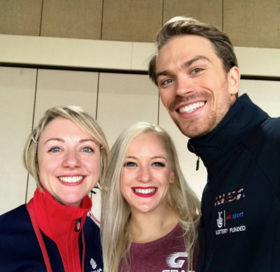 Their achievement is all the more astonishing because it was only in June last year that Penny smashed her right kneecap into eight pieces after a serious fall. At the time, it threatened to bring her skating career to a premature end.

After months of painful rehab, not only is Penny now back on the ice, and competing again, but also a serious Olympic Medal contender for next year! She and Nick have even been working on new routines choreographed by Nottingham ice skating legends Jayne Torvill and Christopher Dean.

After her victory in Germany, Penny took to social media to say: “Thank you UK Sport & The National Lottery for supporting Nick and I through my knee injury. We couldn’t have qualified for our third Games without you.”

She also tweeted a picture (see above) adding: “A HUGE thank you to my amazing Physio @TATaylorK @TheISEH for being with me every step of the way. I wouldn’t be back without your super powers!”