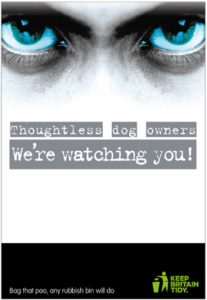 A popular dog fouling campaign called “we’re watching you” is coming to Ruddington this month, aimed at dog walkers who don’t scoop the poop.

Ruddington Parish Council has joined forces with environmental charity Keep Britain Tidy in a bid to reduce dog fouling in key problem areas of our village.

The campaign sets its sights on irresponsible dog owners, with recent research showing that dog walkers are more responsible and pick up after their dogs when they think they’re being watched.

In 2014, Keep Britain Tidy conducted a campaign pilot, funded by the Department for Environment, Food and Rural Affairs (Defra), working with land managers across the country. This pilot saw an average reduction of 46% in the levels of dog fouling, with up to 90% reduction in some areas since.

Feedback suggests that dog fouling tends to occur at night time and during the months with shorter days, as some dog owners feel they can’t be seen ‘under the cover of darkness’. That’s why the “we’re watching you” signs are visible after dark, and use innovative, state of the art materials to “glow in the dark”. The campaign is the first time this kind of material has been used on a poster.

Claire Dorans, Clerk to the Parish Council, said, “Feedback from residents has told us that dog fouling is one of the main issues in Ruddington that they’d like to see addressed.

“The vast majority of dog owners are responsible people, who habitually pick up after their dog and dispose of the poo bags correctly, either in the nearest bin or by taking home to dispose of in their own household bin.

“We’re thrilled to be working with environmental charity Keep Britain Tidy, and to be part of such a cutting edge campaign. We hope Ruddington will the same great results as the other towns and villages that have already signed up.”