The Ruddington Arms on Wilford Road has scooped the ‘Famous for Food’ accolade at the Star Pubs & Bars 2016 Star Awards in Liverpool. The pub was one of 1,100 venues across the UK to be assessed across a range of categories including ‘Best Bar Team’, ‘Heart of the Community’ and ‘Pint Perfection.’

Finalists in each category were visited by mystery judges, who described The Ruddington Arms as “an outstanding place to eat”. The judging team were especially impressed by the pub’s commitment to sourcing high quality seasonal produce, and their commitment to using local farms and suppliers. 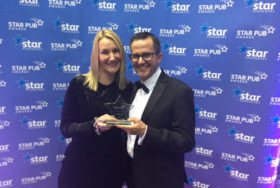 The Ruddington Arms was opened in April 2014 by owners Mark and Sarah Anderson, following a £250,000 makeover which transformed the venue – formerly known as The Jolly Farmers – into an attractive, modern gastropub with a 50 seat restaurant area. Since then, the pub has gone from strength to strength, attracting customers from near and far, and helping put Ruddington’s drinking and dining scene firmly on the regional map.

Speaking to The Nottingham Post, Mark said of the ‘Famous for Food’ award: “It’s great to receive a nationally recognised award. It makes all the hard work worthwhile and it’s good for the whole of the team.”

In 2017, The Ruddington Arms will feature in the Michelin Guide for the third year in a row – one of just two Nottinghamshire pubs to make the grade in next year’s edition. Well done to Mark, Sarah and all the team!