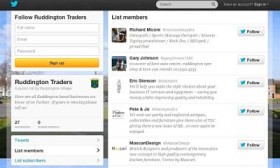 If you’re on Twitter you may be interested to know that our own independent village news and information service @Ruddington_info has created a list called “Ruddington Traders”.  It is hoped that villagers will subscribe to this list to get targeted Tweets on all the latest news, products and offers from their local businesses. Currently there are 27 members – comprising the known village traders already on Twitter. Even if you’re not signed up to Twitter yourself you can view this list by visiting:-https://twitter.com/Ruddington_info/ruddington-traders/members
If your village business is missing, or you’re just starting on Twitter, then please let @Ruddington_info know (either via a Tweet or by emailing info@ruddington.info) and they’ll add you on. Alternatively there is another list called “Rudd Groups and Charities” for non-profit making organisations and groups based in Ruddington to get yourselves listed and promote your activities via Twitter:-https://twitter.com/Ruddington_info/rudd-groups-and-charities/members
One of the newest members of this list is St. Peter’s Church – which has joined Twitter using the name @StPetersRudd.  It’s Tweeting information, thoughts and photographs of events and people in the community.
The church already has a good number of Twitter followers, many of whom live in the village. But one of the first followers was an ex-Ruddington resident who now lives in Australia. ‘I love Twitter’, says Nikki Parkinson, who administers the church account. ‘Anyone can find out about what we are doing, see photos of services and get to know about the new things that are happening.  It’s also a great way of linking up people, places and businesses in Ruddington. Lots of people are on Twitter and it brings us all together.’ To follow St Peter’s Church on Twitter, search for @StPetersRudd.               By Graham Wright)