On 8th May this year, our village commemorated the 75th anniversary of VE Day (Victory in Europe), which marked the end of the Second World War in Europe.

In the exceptional circumstances of a national lockdown due to the COVID-19 pandemic, residents and businesses rallied together to have “Stay at Home Street Parties” galore. The village was also adorned with patriotic red, white and blue decorations. 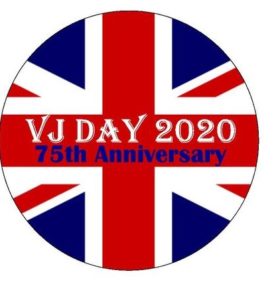 On 8th May 1945 when Winston Churchill spoke to the nation, he reminded the population that although they were elated at the Victory in Europe: “…let us not forget for a moment the toll and efforts that lie ahead. Japan with all her treachery and greed, remains unsubdued.”

For the following three months, many thousands of armed forces personnel were involved in bitter fighting in the Far East. Ultimately in August 1945, Japan surrendered after the devastation caused by two atomic bombs dropped by the United States on Hiroshima and Nagasaki. Finally, the War was over.

Saturday 15th August 2020 was therefore set to be a day to commemorate the 75th anniversary of Victory in Japan (VJ Day). However, as COVID-19 restrictions continue, all official events have been cancelled.

However, why not get your patriotic decorations out again and maybe even have another Stay at Home Street Party in your neighbourhood on this date? Lest we forget that VJ Day signalled the actual end of the Second World War.