On Saturday 4th July, Ruddington Village Market returned after a four month physical absence, and it was a huge success. Organisers, traders and visitors did an outstanding job of relaunching as a socially distanced market in its new location on The Green.

At 9am, everyone was ready to go, and queues started forming at some of the most missed and hotly-anticipated stands. Market regulars Split Screen Coffee, Beeston Brownies and Duke & Grey had orderly queues forming from early on, with small orange cones marking the 2m queuing distance leading to each stand. Black Cat Café was popular and was one of the first to sell out of their sausage rolls and famous scotch eggs. We’re assured they’ll bring more next month! 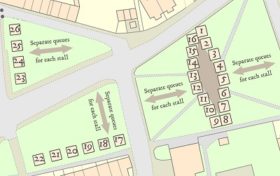 There was never a lull in the queue; as other stall holders started packing up at the later finishing time of 1pm, people were still patiently waiting to get their hands on bottles of the first batch of gin to come from the Ruddy Fine Distillery.

Owners Cheryl Stretton and Rory Thorpe were blown away by how the village gin drinkers welcomed them to the market, greeting each visitor with a smile and a warm “Thank you for waiting. Would you like to try some gin?” Even at 9am it was difficult to say no!

Becoming the focal point of “unlocking lockdown”, village residents were bumping into friends they hadn’t seen for months and milling around the outskirts of the market for a chat. Reports from Alex Preston of The Bottle Top and Sally Pickard from Phoenix Flowers suggests that the market also helped attract visitors to other businesses in the village.

The frequent stopping of Nottingham City Transport‘s Navy 3 and Green 10 services at the Ruddington Green bus stop only added to the feeling that normality is returning to the village. Despite easing back into promoting the market, word had spread as far as Loughborough as one first time visitor said: “It’s the furthest I have travelled in months!”