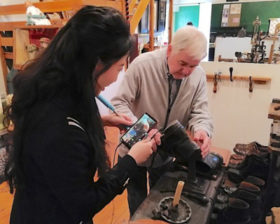 Since it opened in 1968, the Village Museum has welcomed around 75,000 visitors through its doors. It was something of a surprise, therefore, to play host to 438,000 virtual visitors from China on the morning of the local elections on 2nd May.

Feixue Huangdu, a Masters student at Nottingham Trent University, asked if she could livestream a tour of the museum to her heritage-hungry audience back home. Four museum guides took Feixue on a tour which, with simultaneous translation and a barrage of questions from viewers, took rather longer than usual.  The item which provoked the most questions was a 1930s black doll – it seems that all dolls in China are Chinese in appearance – and the most difficult to explain was a wooden clothes peg,

This was Feixue’s sixth heritage livestream since she’s been in England and the most popular to date. You can view the broadcast (and brush up on your Chinese) at http://lj.lanjingfm.com/radio/viewRoom?rid=55766.