Cadets from 2425(Nottingham Airport) Squadron ATC and Ruddington Detachment Army Cadets took part in a unique event exactly 90 years after the memorial was first unveiled and dedicated on 19 May 1923.The Cadets paraded the Royal British Legion Standard together with their own Standards at the memorial and then formed a guard of honour outside the St Peters Church as Councillors and members of the public entered the church for the Thanksgiving Service.

Reverend A Buchanan conducted the Re-dedication and Thanksgiving Service. The Last Post and Reveille was sounded by Mr P Webster. The congregation included about 100 members of the general public together with members of the County and Parish Councils and members of the Ruddington and District Branch, RBL. Family members of at least two WW1 casualties were also present. 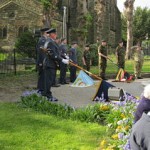 work came about after an inspection undertaken on behalf of Ruddington Parish Council found that weather damage and general wear and tear over the years had taken its toll. The Parish Council made a successful application for funding from the Nottinghamshire County Council Local Improvement Scheme and local stonemason Mark Stafford was appointed to undertake the work.

Shortly after the restoration started in March 2013 Ruddington and District Branch of the Royal British Legion realised that the 90th Anniversary would be in May. Every year on Remembrance Sunday the RBL organise a service at the War Me 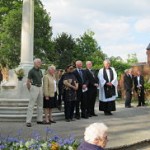 morial when many villagers turn out to pay their respects and remember all who gave their lives for our freedom.  With the support of the Parish and County Councils the RBL went ahead and organised the short ceremony which took place on Sunday 19 May 2013 to mark the 90th Anniversary.

Due to the poor spring weather conditions the work took longer than expected and it was only completed on Friday 17 May. Thanks must go to all parties involved in making sure that the Re-dedication went ahead.

Marilyn Parker, secretary Ruddington Branch, RBL said “Being able to mark the completion of the restoration work exactly 90 years to the date since the Memorial was first unveiled is a very fitting way to remember and commemorate all the Casualties of War from Ruddington. It is particularly important that the Memorial has been restored to its former glory as 11 November 2014 will mark 100 years since the start of WW1”