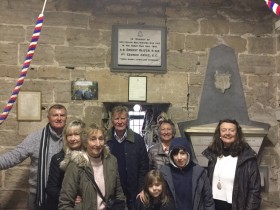 4th Battalion, Grenadier Guards died on the battlefields of France fighting in the Loos area.

He has no known grave but is commemorated on the Loos Memorial which forms the side and back of Dud Corner Cemetery 5 km north-west of Lens. His parents Robert and Bertha Grice lived on Shaw Street in Ruddington.

Before George went off to war he was a bell ringer at the St Peters Church.

Exactly 100 years on members of his family assembled at the Church to exchange details and listen to a Quarter Peal of Grandsire Doubles being rung on the bells by a team of ringers from Ruddington and Clifton to commemorate the occasion.