On Sunday 13th September, the Ruddington Village Colts u12s (Sunday) team claimed third place in their league’s cup competition. The Young Elizabethan League (YEL) were able to organise a mini tournament for all the teams that had reached the semi-finals of the competition during last season 2019/2020. 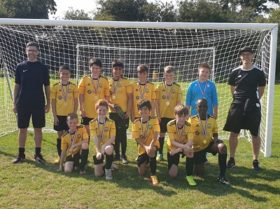 Team kit is sponsored by JP Lettings,
thanks for their continued support.

The boys narrowly lost a hard fought game 2 – 0 in the semi-final against Sports Gateway. However, they picked themselves up and held their nerve to win the third place prize in a tense penalty shoot-out against Quarrydale United, after the game had ended 1–1. Congratulations to all the boys for a great effort.